Miller Diversified has recently completed the first part of an incredibly exciting project for a school in Martins Ferry, Ohio. This school has been through quite a bit since it was first built, and Miller Diversified was able to complete the majority of the project just in time for the start of the school year.

This Ohio Construction Project At A Glance: What happened at Martins Ferry?

Martins Ferry High School was constructed in 2008 by another company, and after the warranty period expired, the school started to notice that the floors began to heave. This heaving and buckling was so bad in some areas that the building was becoming difficult to use. Doors no longer opened because of swelling in the floors, and cracks appeared throughout the building. The school hired an engineer and performed extensive testing. The engineers found that some areas of the school had geotechnical conditions under the concrete slab which had caused expansion and heaving.

So what sort of geotechnical conditions could have caused such havoc? A shale fossil bed. Chemical reactions in shale layers cause gypsum crystals to form from pyrite (commonly known as Fool’s Gold). These crystals cause the shale layer to expand, and without sufficient pressure from above, the ground began to buckle and heave over time.

A Groundbreaking Solution For A Ground Breaking Problem

When Martins Ferry first approached an engineer from another company, they received a preliminary estimate for the repairs... $20 million was the price. Miller Diversified got involved when the school did not have the funds available for the repairs. Our team reviewed all the geotechnical reports and consulted with experts in subsurface conditions to help develop a repair that would save the school over $16 million.

The repair for this project was as unique as the conditions that caused the issue. Miller Diversified helped devise a robust helical pile system, which essentially acts as a large screw, pinning the foundation and the slab of the building down through the layer of shale, and into competent loadbearing soils beneath the shale. Once the helical piles are installed, a 4” voidform is integrated with the piers, laid on the subbase and the concrete poured over the top of the voidform.  Voidform is made from cardboard and will break down over time to create a 4” void for any additional movement of the pyrite between the subbase and the concrete slab.

Martins Ferry is just one of several projects Miller Diversified Construction has completed with complex subsurface factors. These projects are handled with the utmost care and concern because stable ground is mission-critical to any successful construction project. Miller Diversified is glad to have helped Martins Ferry High School reopen its doors for the 2022-2023 school year. 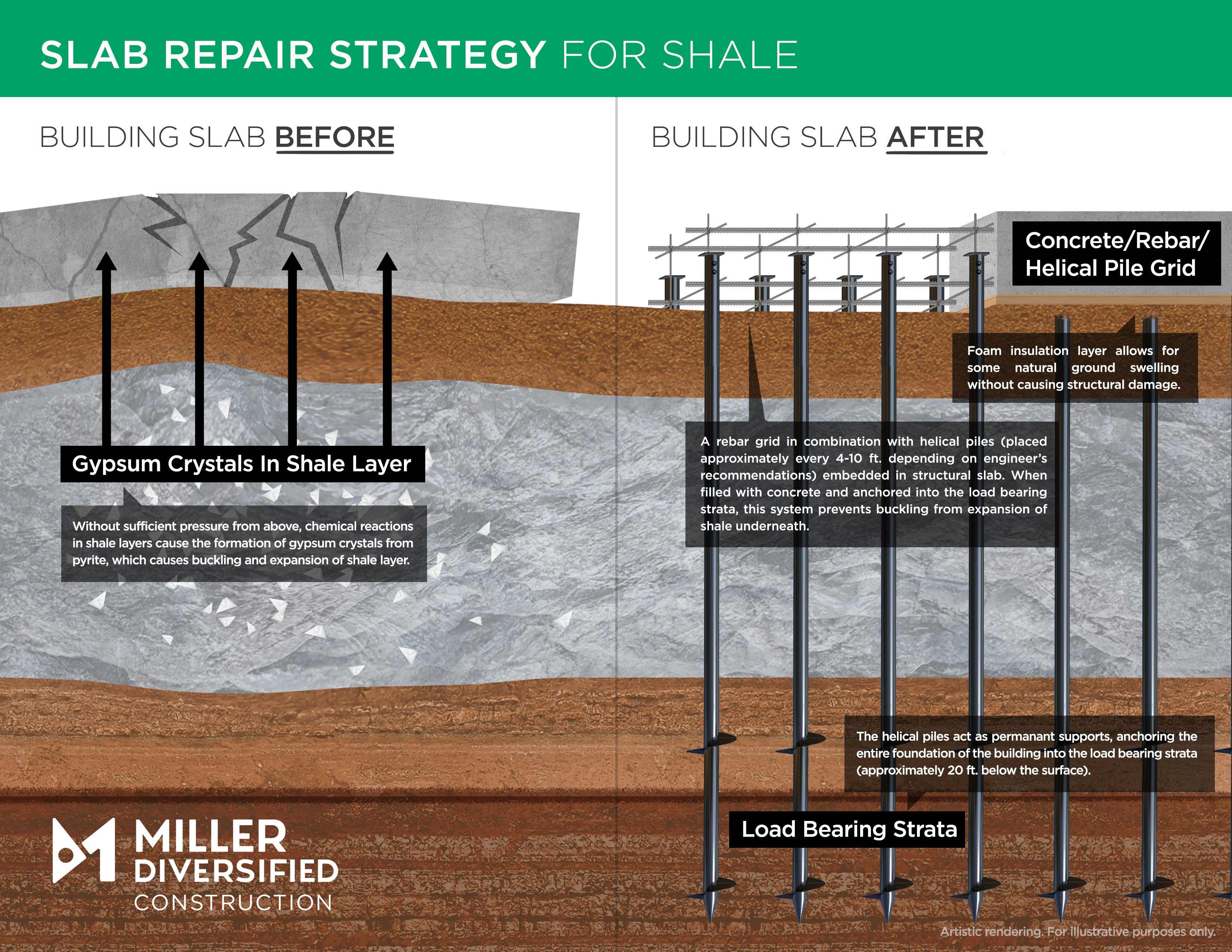